September 9th, 2012- Washington Redskins quarterback Robert Griffin the Third, aka RG3, starts an internet sensation called “griffining” after he emphatically raised his arms on a touchdown pass to beat the New Orleans Saints. Coach Mike Shanahan gushed about his decision making and accuracy, whispers started for the Rookie of the Year Award, people began murmuring that perhaps the Colts should have drafted the electrifying playmaker from Baylor rather than the prototypical pocket passer Andrew Luck with the No. 1 overall pick. RG3 was a popular man in Washington, and it seemed as if he was to be one of the crop of young quarterbacks that was going to bring the NFL into the dual threat age. 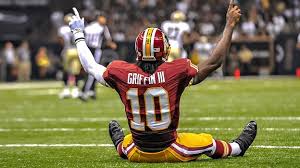 But that wasn’t the beginning.

The beginning was in 2011, RG3’s final year at Baylor. Coming into the season, Andrew Luck was seen as the favorite for the Heisman. Following a terrific junior year in which Luck narrowly lost to Cam Newton for the Heisman, it was expected that he would capture the award in his senior year to cap a terrific career at Stanford and springboard him into the NFL on a high note. Luck was seen as the best Quarterback prospect since Peyton Manning.

As the season wore on, Griffin began to gather interest. People started taking notice of his ability to break ankles in the open field and sling it like Stabler. Baylor put up huge offensive numbers, and the fever pitch around Griffin began to escalate.

After being the favorite for Heisman for the entire year, Luck slipped behind Griffin in the voting and lost narrowly for the second straight year, despite playing another excellent season. Luck did, however, capture the Maxwell, Walter Camp, and Johnny Unitas Golden Arm Awards.

Griffin was now a media darling and seen as an impact player that could immediately turn around a team’s fortunes and push them into the playoffs. Some NFL analysts reported that RG3 could be better than Luck, that perhaps the Colts preferred Griffin to Luck, and could select him with the 1st overall pick. The Colts announced prior to the draft that they intended to select Luck and the controversy died there. But now the issue was who would have the privilege of drafting RG3. The St. Louis Rams held the second overall pick in the draft, but they had a young quarterback of their own. Sam Bradford, a former No.1 overall pick himself in 2009, had a promising rookie season and appeared to be the Rams franchise QB. Bradford had dealt with various injuries in his short career, but the St. Louis front office felt that he was the answer for their organization. The Washington Redskins had gone many years without a franchise QB. In 2011, they tried career journeymen John Beck and Rex Grossman without much success, as well as a washed-up Donovan McNabb. After years of futility, Washington was desperate. In a bold and shocking move, the Redskins traded three first round picks and a second round pick for the right to move up to the No.2 drafting slot and select Robert Griffin the Third.

That trade had implications that resonated throughout the league. The pressure was now on Bradford to succeed with the Rams, and on RG3 and Washinton to win immediately. The only other time so much had been given up for one player was the infamous Herschel Walker trade of the 90’s that built a Cowboys dynasty.

At first, it appeared that Washington’s big gamble would pay off. Griffin and the Redskins surged late in the season to a 10-6 record, the NFC East crown, and a home game in the playoffs. During a game late in the season, Griffin tweaked his knee.  It was determined that Griffin had suffered an LCL sprain and he missed the Redskins’ game against the Cleveland Browns. There were concerns due to his ACL tear during his sophmore year at Baylor, but the coaches decided to let him play in their opening round playoff game.

After a bad snap, Griffin’s knee bent awkwardly as he attempted to corral the loose ball. He tore his ACL and LCL, and the Redskins lost 24-14. Things were never the same.

Griffin wasn’t allowed to play in the Redskins preseason in 2013, and he struggled in the regular season. Griffin seemed to have lost the electricity of his days at Baylor and his rookie season. In addition, he regressed as a passer. Washington was so horrible that Griffin was benched for the last three games to avoid injury risk.

The worst part was, the Redskins wouldn’t even get the second overall pick they “earned” as one of the league’s worst teams. Instead, the St.Louis Rams were able to select one of the premier offensive linemen in college football as they sought to create a powerful ground game.

2014 was supposed to be RG3’s comeback year. Almost a full year removed from the catastrophic injury, Griffin looked to redeem himself as the player he was during his rookie year. Things did not go to plan. Griffin was supposed to learn how to slide to prevent injury when running in the open field. This was a concept he never mastered. Griffin was so horrible at sliding that it became more of an injury risk of him catching his cleats on the turf and injuring his knee again than it was to let him get demolished by linebackers. In addition, Jay Gruden was brought in as the Redskins’ new coach. Reports surfaced late in 2013 about Griffin clashing with former Coach Mike Shanahan. Griffin was becoming a high-maintenace player, and Washington owner Dan Snyder seemed to be coddling him.

2014 didn’t go much better that 2013 for Griffin. The year he was supposed to reclaim his spot as a Pro-Bowl caliber quarterback instead ended up with him being written off as a draft-day mistake. Griffin never learned to make reads at the NFL level, or learned the difference between “college open” and “NFL open”. Griffin’s accuracy also seemed to vanish into the wind so quickly, it makes you wonder if it was ever there.  Griffin got injured, came back, and was benched for Colt McCoy, the former Texas star that many doubted would succeed in the NFL.

With the incredible play of Tom Brady, Aaron Rodgers,  Andrew Luck, and Peyton Manning, as well as the demise of Colin Kaepernick, RG3, and Cam Newton’s struggles, many have suggested that this could be the end of the dual threat era. It took the league by storm, but defenses learned to adjust. What may work in college does not always work in the NFL. Players are stronger, faster, smarter.  Perhaps the dual threat Quarterback was not even an era, but more of a fad. These running QB’s never learned to make reads, and couldn’t adjust to changing defenses. It will always help a team if their QB can make something happen when everything falls apart, but running as a first or second option will gurantee you a short career in the NFL. Some QB’s have made it work, such as Steve Young or Russel Wilson, but only because they are excellent passing quarterbacks as well.

Griffin will go down infamously in NFL history. There have been other busts of epic proportion before (JaMarucs Russel, Ryan Leaf), and you could argue that Griffin was not as bad as all that, but the cost to acquire him was more than any other rookie coming into the draft. Washington has been stripped bare of young talent due to the RG3 trade, and they look to be a franchise doomed to mediocrity until they find their franchise QB. The hype surrounding him coming out of college will also soil his legacy as an NFL QB. To suggest that he could have been better than Luck-who has established himself as an elite NFL QB and an MVP canidate-seemed logical at the time, but Griffin was too unproven in an NFL system to merit such high praise. In the coming draft, expect teams to exercise caution when considering dual threat QB’s such as Brett Hundley and Dak Prescott. To have success in the NFL, a quarterback must be able to throw accurately and consistently make the right read. “Dual Threat” quarterbacks is really a misnomer when considering RG3 and Kaepernick, because they can’t throw with any consistency. There still is time for Robert Griffin the Third to live up to his billing-but that time is running out. Baylor was the beginning, “Griffining” was the peak…is this the end?

Information on the Redskins 2012 season: