Arizona came out the gate strong in 2014, their ferocious defensive fire fueled by the fact that they were left out of the 2013-14 NFL Playoffs with a 10-6 record. Despite losing linebacker Daryl Washington and defensive tackle Darnell Dockett for the entire season, Arizona was a dominant team from the start of the season until Carson Palmer and Drew Stanton went down with leg injuries. The rise of Michael Floyd, Tyrann Mathieu’s comeback from an ACL tear, and the contributions of a revamped offensive line and rookie safety Deone Bucannon raised the Cardinals to the top seed in the NFC before they fell in the standings due to a rash of QB injuries. Rookie Logan Thomas has potential and possesses great arm strength, but the former Virginia Tech passer is not ready for the NFL. With starter Carson Palmer out for the year with a ACL injury, backup Drew Stanton was thrust into the starting role. Stanton was a mixed bag as a starter, but he was competent enough to give the Cardinals a fighting chance in any game they played. With Stanton’s injury, Arizona was left with Ryan Lindley, career backup, and Thomas. Head coach Bruce Arians has decided that Lindley is their best bet at QB right now. Lindley hasn’t exactly impressed. The Cardinals lost the last two games of the season and come into the playoffs without much momentum. The Cardinals lost to the mediocre 49ers and Lindley telegraphs his passes too much for the Cardinals to win this game. Their opponents, the Carolina Panthers, are considered somewhat of a joke as they were division champions with a losing record. That won’t matter in this game, as a revitalized Cam Newton destroyed the Atlanta defense in a decisive Week 17 victory that pushed Carolina into the playoffs. Carolina is also a flawed team,  lacking great receivers or a decent secondary. Carolina’s mediocre season, however, ended on a high note as they embarrassed Atlanta on the road. Carolina’s huge advantage is that Ryan Lindley is incomparable to Cam Newton. Bruce Arians is a great coach, and the Arizona Cardinals have a great team, but the quarterback issue is a problem without a solution. The Redbirds will fight for 60 minutes and then some, but they lack the offensive firepower to advance to the next round.

Credit for the image goes to: http://bleacherreport.com/articles/1704254-arizona-cardinals-players-who-need-to-step-up-in-2013

Leg injuries to Carson Palmer (3) and Drew Stanton (5) have left the Cardinals without a quality signal caller. 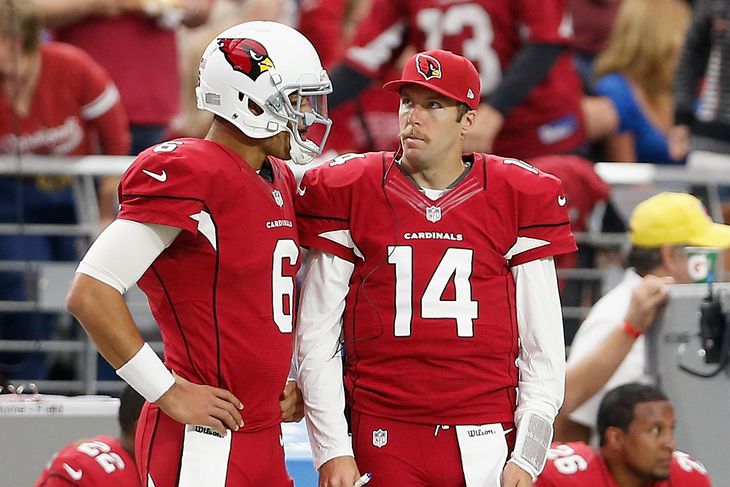 Credit for the image goes to: http://www.ninersnation.com/2014/12/22/7436151/bruce-arians-leaning-toward-logan-thomas-to-start-for-cardinals-in