Let’s just skip over the bottom feeders such as Ohio State, Michigan State, and Michigan. We all know they’re not going anywhere, right?

Most coaches will take a 62-16 final score in their favor, and Kirk Ferentz is no exception. There’s a good vibe in Iowa City, as the Hawkeyes are exceeding expectations with a 4-0 start this season. Wins over rival Iowa State and a talented Pittsburgh squad are perhaps more impressive than a thrashing of North Texas, but it’s important not to understate the positive aspects of the win. CJ Beathard had the best game of his career and is finding his rhythm heading into Big 10 play. He started 15 for 15 and the passing game was smooth all day long. Running back Jordan Canzeri already has eight touchdowns, and the offense is feeling upbeat headed into a crucial matchup with Wisconsin on the road next week. The defense still needs work, as evidenced by the Pittsburgh game, but you can’t fault Iowa for taking an opponent they were supposed to pulverize and doing so.  They took care of business against an inferior opponent, but far tougher challenges lay ahead for Iowa. Grade: A-

Herky’s ready for B1G action. Are you?

Up Next: At Wisconsin

If Iowa wants to make some noise this year in the Big 10 or on the national level, this is the place to start. No, Wisconsin isn’t Alabama, but they did start off the year ranked and were favored to win the Big 10 West. A victory here would go a long way.Iowa certainly has the ability to win this game if they play their A-game. The key will be containing running back Corey Clement and putting pressure on QB Joel Stave to force him into bad decisions. Beathard’s performance against a Big 10 defense will be key in this match up. Remember, this will be his first taste of Big 10 football. It’s time to see if Iowa is for real.

Hoosier Sleeper Team in the East? Indiana, of Course

IU held off a late rally from the Demon Deacons of Wake Forest down in Winston-Salem, collecting a quality win over a Power 5 opponent. Indiana’s theme this year has been finding their groove in the third quarter, and it was no different today. They now have outscored opponents 51-0 in the third quarter this year. Indiana was hindered by a sluggish start and a late defensive collapse, but still managed to come out with a 31-24 victory. The game appeared to be in the bag with the Hoosiers leading 31-10 late in the fourth, but Wake Forest managed to make it interesting by scoring quickly, recovering an onside kick, and scoring again. Eventually Indiana’s defense put some steel in their spine and ended the comeback bid, but they had IU fans nervous for a while at the end of that game. Wake Forest isn’t exactly a Powerhouse, but they are a solid ACC team that shouldn’t be taken for granted. Indiana has put together some quality wins to start off this season, most notably a narrow victory over Western Kentucky. WKU QB Brandon Doughty led the nation in passing yards in 2014, but the defense managed to hold up and the offense came through for a 38-35 victory. University of Alabama-Birmingham, also known as UAB, cancelled their football program last year (before reinstating it for 2016), and no one has benefited more than Indiana. UAB transfer Jordan Howard has nearly replicated the production of former Hoosiers superstar Tevin Coleman, who broke the record for most rushing yards in a game last year and was drafted by the Atlanta Falcons last April. Howard currently leads the nation in rushing yards and has largely carried this offense. QB Nate Sudfeld has done a nice job of game managing, but he’ll need to do more than that next week. Grade: B+ 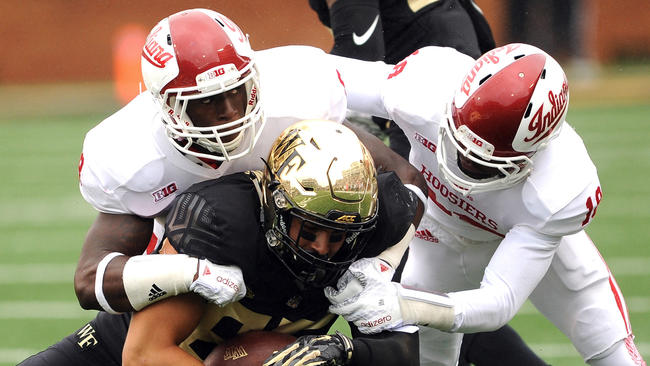 The third quarter has been Indiana’s bread and butter, as they have yet to allow a single point in the third.

Up Next: The Elephant in the Room.

Indiana’s got a real chance to do something historical for their program next weekend. Beating the defending national champion would change IU Football forever. Ohio State has looked vulnerable at times, switching between quarterbacks and seeming off kilter at times. A narrow victory over Northern Illinois and a sloppy win against Western Michigan leaves Ohio State open to a potential upset against a young and confident Indiana team, who’s feeling it right now after their 4-0 start. But let’s not kid ourselves. IU had trouble dealing with Kendall Hillton’s mobility, and he’s only a true freshman making his first career start. If Hilton was able to find easy success against IU’s front seven, imagine what JT Barrett would do to them. As for the young secondary that was torched by Southern Illinois in Week One, they better pray Cardale is off his game next Saturday. Any of that slow start, late capitulation, won’t cut it against the Buckeyes. The opportunity for a statement is tremendous. But so are the odds.

Enjoy This One, Rutgers…

The difference between a Rut(gers) and a groove is attitude, right? Mhm. Rutgers brought out the classic red and white home jerseys, which harken back to the good ‘ol days of 2006 and 2007, when Rutgers was ranked. There was reason for optimism last year in New Brunswick, as RU went 8-5, wiped the floor with North Carolina in the Quick Lane Bowl, and won three games in the Big 10, including one over Michigan, a long time iconic college football program. As for this season…let’s just leave it at Murphy’s Law. Whatever can go wrong, will go wrong. No reason to get into that. Rutgers beat Kansas by 13 this weekend, which would be a lot more impressive if this were basketball and if Kansas wasn’t on the edge of being the worst Power Five team of all time. Kansas lost to South Dakota State Week 1 (and haven’t won since, if you’re wondering), which should tell you all you need to know about them. Rutgers is .500 which is great, considering this is likely to be the last time that’s true. It’s not my intention to bash on Rutgers, but the future looks bleak with superstar receiver Leonte Carroo suspended indefinitely, 5 other players kicked off the team,  and Head Coach Kyle Flood suspended (when he should have been fired). The coaching staff is determined to stick with turnover machine Chris Laviano at QB, while fans call for cannon-armed high school stud and LSU transfer Hayden Rettig.  Oh, and Rutgers’ best recruit in years, DT Darius Hamilton (who is also the best player on a bad defense), is out for the season. Just remember, it could always be worse…they could be Kansas. Good for Laviano throwing two TD’s along with his two picks, and it’s good to see that Paul James is still healthy after suffering season ending injuries the last two season.

Do you believe in miracles?

Rutgers stands about just as much of a chance against Michigan State as the original Spartans did at the Battle of Thermopylae. But hey, stranger things have happened.

I do not own any of these pictures and all credit goes to the website and photographer.