This has gotten out of hand.

When Addison Russell, a .242 hitter, is starting the All Star Game, you know the rules need amending. Now, Russell’s a fine young player, and he’s got a bright future, but this is ridiculous.

This year, it was Cubs fans who went bananas, voting in their entire infield over far more deserving candidates. Kris Byrant and Anthony Rizzo are justifiable All-Star starters. Addison Russell and Ben Zobrist are not.

Take a moment to compare these stats:

Now here’s where it gets really ridiculous. Corey Seager, the much heralded rookie SS for the Dodgers, is hitting .304 with 17 HR’s and 41 RBI’s. How on earth is Russell starting over him? 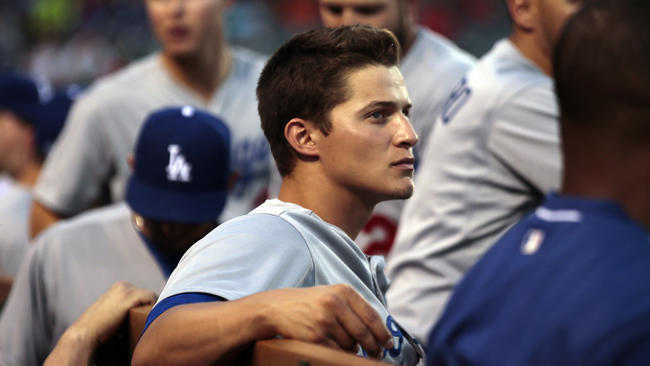 I would be mad, too. (Robert Gauthier/Los Angeles Times)

It’s not just Cubs fans who are to blame. The Red Sox also have a disproportionate number of players starting the All Star game. At least with those players, they mostly deserve it. Bogaerts, Betts, and Bradley Jr. are defensible as the three best players at their respective positions. You’re still not forgiven for Brock Holt last year, Boston fans. Last year the Royals pulled the same stunt as the North Siders are this year, their success-starved fans blitzing the polls in response to their first competitive team in what feels like forever.

Now, none of this would be a big deal if this were the NBA or the NFL. Though All-Star games and Pro Bowls are used as a metric in Hall of Fame voting, those two games mean absolutely nothing. The NBA All Star game is a glorified Globetrotters practice, and nobody wants to try in the Pro Bowl for fear of getting injured. That’s made those two events nearly unwatchable.

Now the MLB All-Star game means something-home field advantage in the World Series. That’s not something to mess around with. The good news is that it’s given us some terrific games over the years-low scoring, 15 inning games going down to the wire, fantastic defensive efforts, and a chance to see the best in the world put forth their best effort. That’s something the fans deserve, given the amount of revenue the MLB garners off of the fans.

The fans deserve the best. (Photographer not given/ESPN)

But here’s the issue-the determination of home field advantage to whichever league wins the All Star game is tremendously unfair to the teams that make it to the Fall Classic. Let’s take this year’s San Francisco Giants as an example-right now, they have three All-Stars assured of making it to San Diego on July 12th. Two of them are pitchers, and Madison Bumgarner is likely to start the last game before the break, making him ineligible to pitch in the game. So the Giants might get two or three plate appearances by Buster Posey, and maybe an inning from Johnny Cueto.

Now let’s say Addison Russell and his .242 average is up with a chance to drive in the tying run in the bottom of the ninth and he strikes out. Now the AL has home field advantage in the World Series. If any other team than the Cubs makes it to the Fall Classic from the Senior Circuit, Cubs fans and their blind, senseless favoritism will have put the NL team at a disadvantage. The Giants have a good shot at being the NL’s representative in the World Series, yet they would cede home field advantage based on a game where their players had little to no impact.

It’s not just Russell that’s the problem. Daniel Murphy is batting 50 points higher than Ben Zobrist, and has more home runs and RBI’s to boot. Dexter Fowler is 30th in batting average and probably 200th in Home Runs, yet he’s starting in CF over the likes of Carlos Gonzalez, Charlie Blackmon, and Christian Yelich. Teams are no longer in control of their own destiny due to this warped voting system.

The funny thing is, it used to work just fine. Logically, it follows that the better team entering the World Series would be from the better league-that team would have had a tougher road to the World Series. The better team deserves home field advantage. What better way to determine which league is better than an exhibition between the best players in each league? People would go to the ballpark and punch out the little perforated circles and drop the ballot in a box. Every team had the same number of home game a year, so there was no way to gain an advantage. Then online voting came, and it was still fairly reasonable.Yankees fans always voted for Jeter and A-Rod and knew they were going to make it-so they would be generous enough to vote for another guy at first base if their guy was hitting .230 and had 5 homers at the break, because they would rest assured that they were getting their due.

Now the game has changed. You can vote online up to 35 times-and there are easy ways around that limitation. Teams launch social media campaigns to get their players elected, reaching a broader audience and igniting the frenzy that gets unworthy players elected. 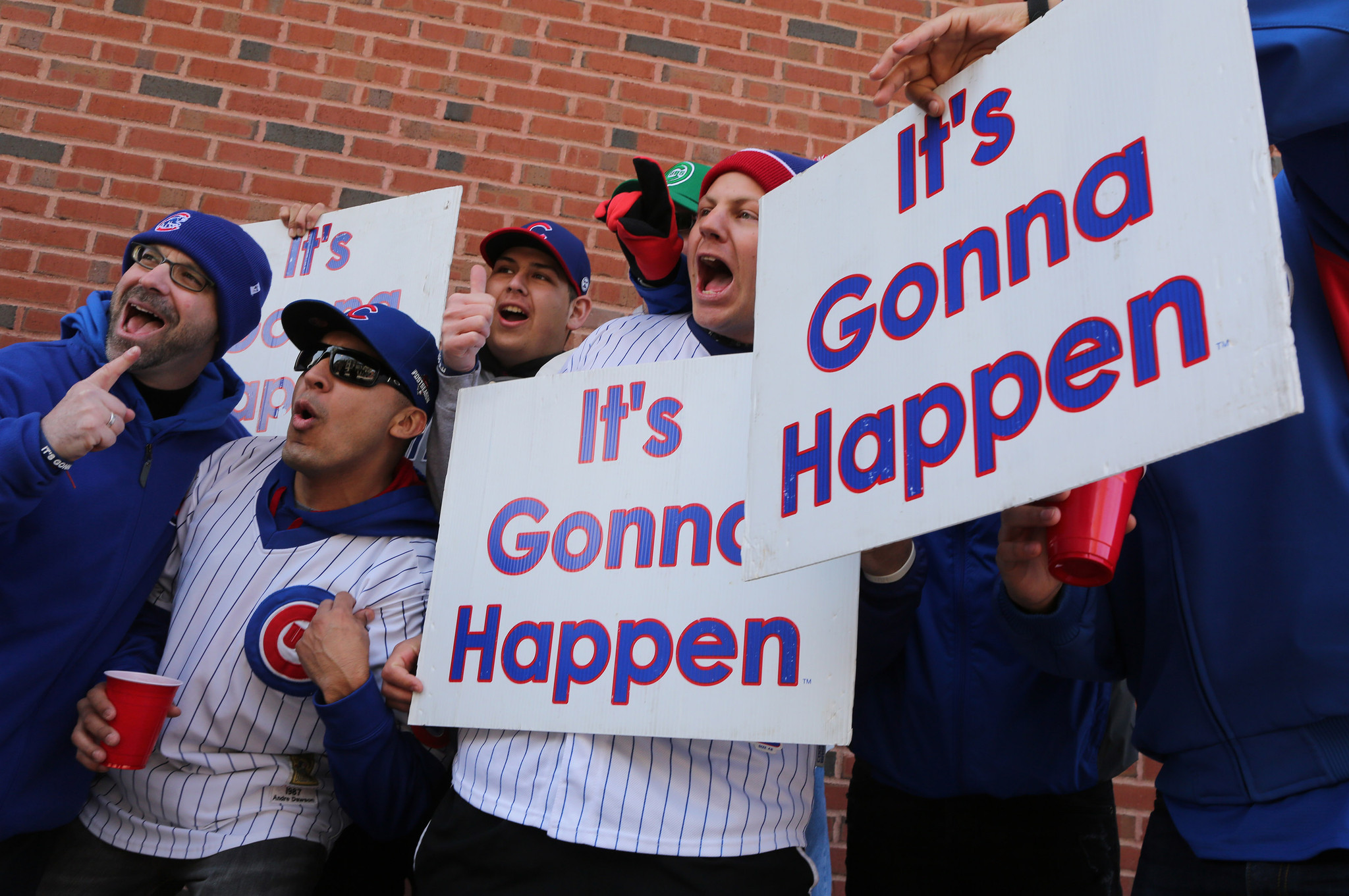 Does it have to? (Photographer not given/Chicago Tribune)

Not all of it is the MLB’s fault. It is, after all, the fans who vote. This new phenom of every player from one team is starting is a result of the desperation of fans whose teams are relevant for the first time since ‘Nam. They don’t know when their next successful season will come, so they react like a starved man who hasn’t eaten in a week-and the result is the abomination that is the current All Star game.

The Yankees have nearly twice the twitter followers of the Cubs and three times that of the Royals. Yet there is not one Yankee in the starting lineup. Why? Because while the Yankees are currently mediocre, they will always be relevant. Twenty-seven championships will do that to a franchise. For the Cubs-who’s World Series drought makes the curse of the Bambino look like a brief dry spell-this is a chance to be relevant in the baseball world again, to be remembered and recognized for something other than their futility. For the Royals last year, it was the same opportunity. In the 30 years between their two titles, the Royals were consistently one of the worst teams in baseball. Royals fans were desperate-and that desperation is what’s ruining the midsummer classic.

The MLB has created a situation for a beautiful event-the pinnacle of talent of America’s pastime, representing all that is right in the world and the carefree days of the summer-and allowed it to become mutated and disfigured into a frustrating exercise in gloating. It’s not all the MLB’s fault. Billy Bob from Nowhereville, Kansas and either his baseball ignorance or purposeful homerism is to blame as well. But it’s not Billy Bob’s problem to solve. It’s Rob Manfred, MLB Commissioner, who is tasked with stemming the tide of overeager fanbases putting their favorite players in the All-Star game because they want to, disregarding any semblance of analysis or impartial judgement on what merits an All-Star selection-and therefore unfairly forcing home field advantage in the most important seven games of the year.

Fortunately, I’ve done their job for them and come up with a few possible solutions to what I’m eloquently naming Desperate Fanbase Syndrome.

First of all, though it has nothing to do with the fans, get rid of the “All-Star from every team rule”. This was established to allow out of market fans to see players from across the country that they might never see otherwise, but it’s a flawed line of thinking. The stars that people from across the country are going to want to see are voted in anyways. Nobody from San Diego wants to see a mediocre reliever from Baltimore get shelled by the heart of the order of the NL that (until recently) should include a solid dose of Hall of Famers. This rule is how Mark Redman and his plus 5.00 ERA ended up on the 2006 All-Star teams, and how George Springer, one of the most exciting young outfielders in the game, gets left off for Alex Colome, a middle of the rotation starter who just was less bad than the rest of his teammates this season. This has become known as the “Random Reliever Rule”. When a team is just catastrophically horrible, the MLB will try to pick the reliever who has the lowest ERA and who is realistically getting by because he faces the 7-8-9 hitters in the bottom of the seventh in a 13-5 blowout and nobody really cares about the game, or notices. These players bring no appeal to the game, not even to their own fans-who wants to be reminded of just how bad your team is this year?-and every year deserving players are left of the game and the opportunity of a lifetime for some reliever with a 4.3 ERA.

This man deserves to be in San Diego on the 12th. (Photographer not given/AP Photo)

If the MLB wants to continue with fan voting, they cannot allow the game to continue to determine home field advantage. The fans have proven themselves irresponsible in choosing the best players in each league. Pick the World Series home field advantage based off of the best regular season record. The problem with this, of course, is that it would allow the game to devolve into a true exhibition. Players would opt out of playing, citing injury concerns, nobody would put their best effort in, and the on field product would crumble to sloppy mess that nobody wants to watch. Right now, the problem is the players on the field are not the best players in the game. With this solution, it wouldn’t matter than you weren’t getting the best players on the field, but few players would put forth their best effort, which would be just as bad, if not worse, than the current travesty.

So here’s what you do. MLB, you’ve entrusted your dear fans with the responsibility of choosing the All-Star team in the same way a father would entrust his convertible to his newly licensed 16 year old son. But your fans have been doing donuts in the parking lot and then crashed your precious car into a lightpost. Nobody was hurt (except Starling Marte-the man’s hitting .320 with 25 stolen bases-come on!) but the fans have proven themselves irresponsible and reckless, and certainly not ready for the great responsibility that comes with this great power of All-Star voting.

Bobby Cox knew what he was talking about. (Photographer not given/MLB.com)

So you have to cut the cord. Let the managers-men steeped in baseball tradition, who probably grease their hair with pine tar and dry their hands off after washing with a rosin bag-pick the teams. Don’t be fooled by the pot bellies and press conferences where they’re about as engaging as a dead fish. These men know their baseball. They’ll get the selections right. And because the managers are always the managers of the teams who went to the World Series the previous season, it stands to reason that they are probably going to be competitive in the following season where they are managing the All-Star team. This gives them a little skin in the game and ensures that they’ll pick whoever gives them the best chance to win-and chances are it won’t be the guy batting .242.

In reality, this post is most likely an exercise in futility. Voting online sells ad space-a lot of it-and the MLB is none too keen to give that up. So you’ll just have to watch from home as your favorite player is left off the team, because your team has been too good for too long or because your fellow fans are too level headed and sane. The MLB is sorry about that. No, they really are, I swear.