It’s been a minute since I’ve written here, partially due to website difficulties and partially due to sheer laziness (my opinions here may be wrong at times, but they will always be honest!), but spring is here and along with the rebirth of nature comes the rebirth of attaching significance to two weeks worth of baseball games. That being said, here’s a refresher on the first few weeks of America’s pastime.

Back to Back MVP Awards Brewing in Milwaukee

It’s becoming an increasingly apparent that Derek Jeter is equally as bad a GM as good he was a shortstop. After being traded away for pennies on the dollar as part of the Marlins’ “rebuild” (they have the tear-down part covered, still waiting on the new construction), Yelich promptly went out and won the MVP award with a DiMaggio-esque season at the plate while also swiping 22 bags and leading the Brewers to an NL Central title where they just edged out the Cubs in a frantic finish. For an encore, he’s already slugged 13 homers, closing in on the record for April (14, set by A-Rod and Pujols respectively) with 9 days left to go. Oh yeah, and he’s also hitting .361. Just another day at the yard.

With Aaron Judge’s oblique injury yesterday, every member of the projected opening day starting lineup except for Gleyber Torres (knock on wood) has now spend time on the renamed Injured List. It’s been a mountain of frustration for a team that just watched their biggest rival hoist another championship flag, their fourth of the millennium, while this season marks a decade since the last time the Yankees won it all. This would not be a huge deal for many teams-heck, the Mariners would be thrilled just to make the playoffs-but this is New York and these are the Yankees. “Good enough” isn’t. These aren’t freak accidents either-the number of soft tissue or ligament injuries is starting to turn some heads regarding the Yankees training staff. Either way, the Bronx Bombers are in serious peril, especially given the fragility of their pitching staff. Every member has either already fallen prey to the injury bug or has an extensive injury history. Still, they’re lucky in that…

Chris Sale Has No Idea Where the Ball is Going

Just a bit outside

The above is quick link to MLB.com, showing Chris Sale’s wild pitch from last week. There were a number of technical difficulties trying to embed the video and even post a screenshot from it, so I guess you’ll just have to take my word for it and his 8.50 ERA as evidence that Sale has been struggling. 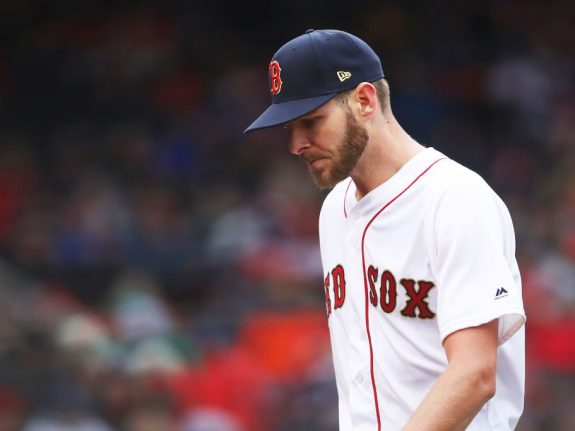 The Red Sox are a sluggish 8-13, and reigning MVP Mookie Betts hasn’t quite mirrored his NL counterpart’s production, hitting a paltry .231 compared to Yelich’s .361 average. The heavyweights in this division need to wake up quick, or risk missing the playoffs in place of the plucky Rays, led by ace Blake Snell and the burning desire to bring in enough revenue to convince ownership to replace the dilapidated Tropicana Field. Things will iron out over time, but in a division where three teams won 90 games last year, there is no time to dawdle. While the former just snapped a 54 at bat hitless streak, the latter signed a two year extension through 2021 that will pay him $33.5m, a significant move for the notoriously stingy Athletics.

Davis’ story encapsulated baseball fans across America with morbid curiosity. It’s been quite the fall for the two time home run champ, who at age 32 last season seemed to completely forget how to hit a baseball. His inexplicable struggles prompted all sorts  of theories on the art of hitting, from the mental side of the game to baseball’s changing dynamics. By all accounts, he is a decent guy and it was nice to see him finally catch a break with a 3-5, 4 RBI day.

Khrush (the A’s Khris Davis), as he is affectionately know by the Bleacher Creatures at the Oakland Coliseum, is a baseball phenomenon of a different kind. A stocky 5-11, 203, with cornrows, he couldn’t look much different than tall, goateed, former A’s slugger Mark McGwire. But their hitting profile is eerily similar. McGwire was criticized throughout his career for being somewhat of a one trick pony-sure, he hit dingers every third game, but he wasn’t of much use anywhere else. Davis doesn’t play the field, has 18 career stolen bases, and has, in the strange twilight zone of baseball that is the Coliseum, hit exactly .247 in each of the past 5 seasons. I swear, look it up. But man can the dude hit homers. With an unique, inside out swing, he’s launched the most longballs in the Majors since 2016, with 143. It’s good to see the A’s finally spend a little cash on the heart of a 97 win team last year, and even better to see the full page ads stating “KD COMMITS TO OAKLAND”, perhaps an interesting dig at another Bay Area athlete who shares those initials.

Tim Anderson instigated a good old fashioned brawl with his bat flip following a two run homer last week. In fairness, he crushed it, and it’s good to see a player inject a little emotion into a sport that even its diehards would admit can be a bit stuffy at times.

What’s slightly less chill is the manner in which he went about it. It was more of a bat chuck than a bat flip-A+ for emphasis, C- on style points-and the fact that it was a 2 run homer in the fourth inning. Anderson and Brad Keller, the pitcher who gave up the homer and plunked him in retaliation, were both suspended, but more for the colorful language they exchanged in the aftermath. There’s a large political debate regarding Anderson’s choice of moniker for Keller that has overshadowed the whole incident.

Baseball is better with more fiery personalities out there. Chase Utley was beloved by Phillies fans and detested by the rest of the NL East for his hard nosed style of play. Lenny “Nails” Dykstra definitely had a screw loose but it sure was fun to watch him on the diamond. And I’m not entirely sure what planet Kevin Mitchell is from, but he was a heck of an outfielder.

Anderson is a fine young shortstop keeping the South Siders relevant, something the baseball community hasn’t been able to say about the White Sox in the past 5 years. But if you bat flip every solo shot when down 6 in the third inning, they tend to those the meaning. I’m not saying he shouldn’t have done it, but it’s been an interesting story in baseball this week.

We’ll be back, hopefully sooner than last time…

One thought on “Checking in on baseball on Easter Sunday”